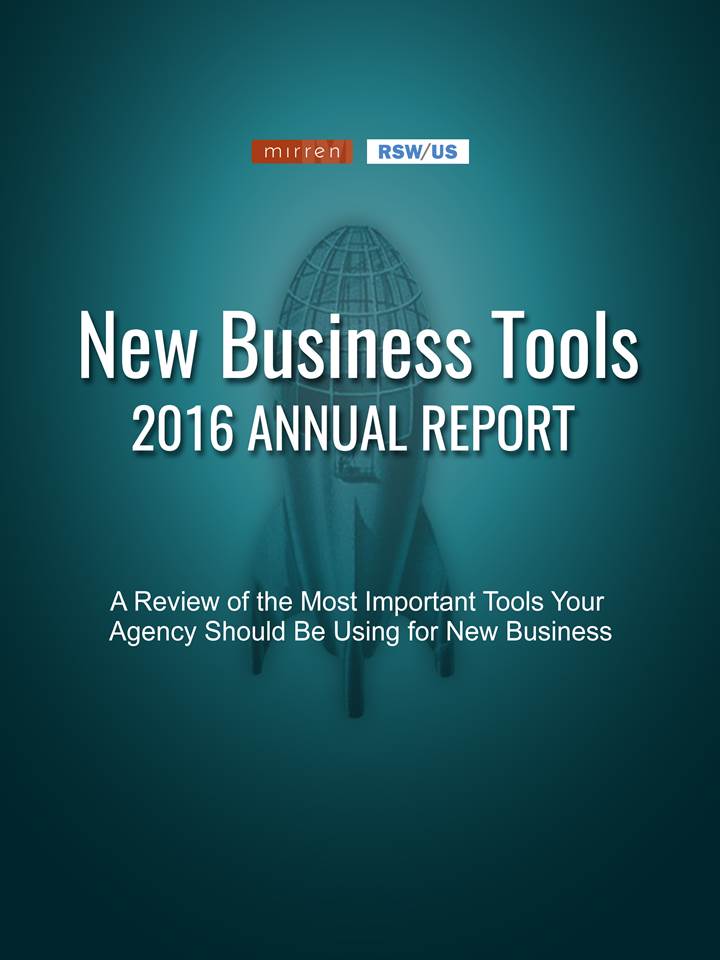 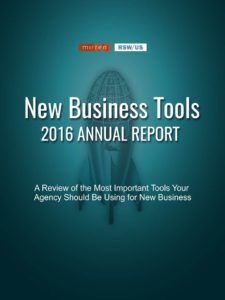 For anyone involved in Agency New Business the ‘Mirren-RSW/US 2016 New Business Tools Annual Report’ is a must-read resource. This Annual Report summarizes information gleaned from a survey of more than 200 senior agency executives from SMEs to medium and large sized companies. They are surveyed on their thoughts and insights about the effectiveness of new business tools put in place in their business in the last twelve months. The executives completed the survey in reference to the following three main categories:

(Q1) What Are Your Three Most Essential Agency Tools Today?

(Q2) Did You Add Any New Business Tools / Services in the Past Year?

For four years running social media tools are continuing to be the highest ranked, that is, the most used new business tool for agencies across the board. Almost 93% of agencies reported that they used social tools for driving new business growth. That said, SEO Tools usage which is essential in driving social media success to target markets in which greatest business growth in market share is predicated, has surprisingly decreased by double-digits two years running. Finally, the new business tools category Meeting / Web Conference Software was added for the first time this year 2016, with 84% of agencies adopting business online meeting tool software, such as GoToMeeting, which happened to receive the highest approval rating. Let us take a look then at the findings in each of the three main question categories.

(Q1) What Are Your Three Most Essential Agency Tools Today?

So, what three tools are most essential for driving new business growth in the run up to the present report? Of the 100 business agency tools tracked in this year’s survey, LinkedIn and Salesforce continued to be cited as two of the most essential tools for driving new business. In third place, and new to the top ﬁve this year, is Winmo, described as the “largest resource for advertiser-agency relationships and decision-maker contact information” (p.8). HubSpot and The List featured in fourth and fifth place respectively. Other significant tools of note included Access Conﬁdential, Daily Vista, Email and CRM systems more generally.

(Q2) Did You Add Any New Business Tools / Services in the Past Year?

More than 70% of executives reported adding a new tool or service to their new business eﬀorts in 2016. While they mentioned 51 diﬀerent tools or services, over 25% of them reported adding Winmo and/or HubSpot to their tool kit specifically. Of the group of respondents 13% added Salesforce and/or Lead Forensics.

It turns out that Salesforce is a clear winner with executives this year. Half of respondents indicated they are using CRM tool Salesforce as their leading platform, and its reported usage has grown substantially year on year from 41% in 2015 to 66% in 2016. Sales tools aside, there are marketing specific tools that have a channel specific analysis given over to them amongst which those pertinent to inbound methodologies feature. Let us take a quick look at the breakdown of inbound marketing tools specific effectiveness rating:

On a scale of 1 to 5, where 1 = not effective, and 5 = very effective, respondents rated HubSpot as most effective at driving an agency’s new business efforts. The chart below represents the average rating of effectiveness given to each Prospect Contact / List Building Service. Let us take a look at how the other tools compared to HubSpot’s effectiveness rating in this period: 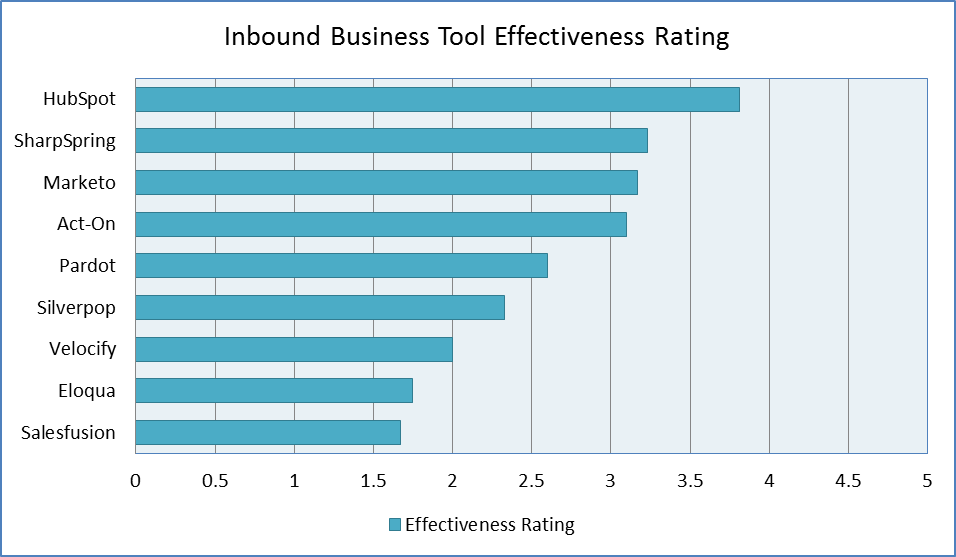 At Emarkable.ie we use the software tool SharpSpring Mail+ for our inbound eMarketing methodology. Remaining in 2nd Place ahead of Marketo and just behind HubSpot, SharpSpring remains a competitive and cost effective choice for SMEs and large companies alike.

In summary, the report presents some attempts to garner what the respondents predict for the coming year 2017. Categorically, agencies selected Lead Generation tools as a priority. From an individual tool standpoint, Winmo and HubSpot were most frequently mentioned for increased usage in 2016, followed by LinkedIn, The List and MailChimp. It remains clear, however, that from the 133 responses the report overwhelmingly concludes that the overarching need for a tool that coordinates operations through a single platform is what is most desired by business leaders for efficiency-laden solutions to day-to-day operational issues in practice. That said, the report concludes that there is an increasing awareness amongst executive level leaders that the market has reached business tool saturation point because of the exponential increase in the number of tools released each year. One respondent sums executives’ fears and hopes for 2017 in one prediction; that most companies will realise the need to be better about using what they have ﬁrst and adopt new business tools further along the line. Well – it remains to be seen in next year’s report. For now, you can access the report by clicking on the image below.

Discussing the elements of an Ecommerce Digital Marketing Strategy that works If you have ever wondered why your online business is not taking off in the direction you thought it would, maybe it’s time to reconsider your business strategy. Planning your online business is essential. Giving your company a personality and interacting with your customers…

As a professional services provider, you are part of the B2B segment, and yet you lack a tangible product. You sell your knowledge, experience, and expertise. You sell solutions to your clients’ pain points and challenges. This can make it difficult to find traction in the digital marketing world. Can you use the same tactics…

Insanity is embracing the same strategy over and over again while expecting different results. This very same mantra holds true in the world of content marketing. While no less than 83 per cent of businesses are seen as having a robust marketing strategy, only 35 per cent actually document it. Without appreciating the individual metrics…