Our marketing team is composed of self-confessed social media nerds, as should be expected from any digital agency specialising in Inbound. A topic that recently came up was the growth of Social Media in the last 5 years which brought us on to the Noughties Social Networking Sites.

From Bebo in its original format to the generation of HTML hobbyists created by MySpace and Xanga, we want to take you on a trip down social networking memory lane.

Definitely a favourite in emarkable HQ, this is the place were the social networking began for quite a lot of people. Myspace still exists but in our professional opinion it is way too sleek these days. Props to them for turning it into a platform for artists to truly showcase themselves as MySpace really did become the platform for music lovers to share their passion. We would love to take it back to the old days of customised HTML backgrounds, frightening the living daylights out visitors to your profile with a blasting tune (“This is sooo my theme song”) and leaving Tom at the top of your best friend’s list in tongue and cheek fashion. It was the king of Noughties Social Networking Sites.

It’s often said that if you were on Friendster, you were bound to work in Social Media one day. During our nostalgic sleuthing we were surprised to discover that Friendster had only ceased operation in June 2015.  It had rebranded from what many consider to be the basis of the Facebook Model to a website dedicated to social gaming. In a previous life it was a trailblazer in social networking and one of the first to break the 1 million user barrier.

Personal note: this was the first social networking site I ever joined at the age of 14!

Hi5 remains intact, taking on the purpose of a sort of dating website for people who just want to find new friends. Established a year after Friendster and a year behind Facebook it was around before Social Networking became a big thing and look a little like Friendster and Bebo’s love child. Sadly the Wayback Machine doesn’t provide any snapshots of what the homepage looked like in its early years but you can find the website in it’s modern format here.  Interestingly, it has combined with Tagged, another site established in the early noughties and one which became noticeably creepy as the years rolled by.

Xanga has re-established itself as an out-and-out blogging platform however in the early days it provided a blogging space as well as a platform for social networking and sharing photos. Think, a crossover between Facebook and Tumblr. It allowed for the ability to create ‘blogrings’ of people with similar interests. It was probably the place where a lot of successful bloggers first dipped their toes in the water. 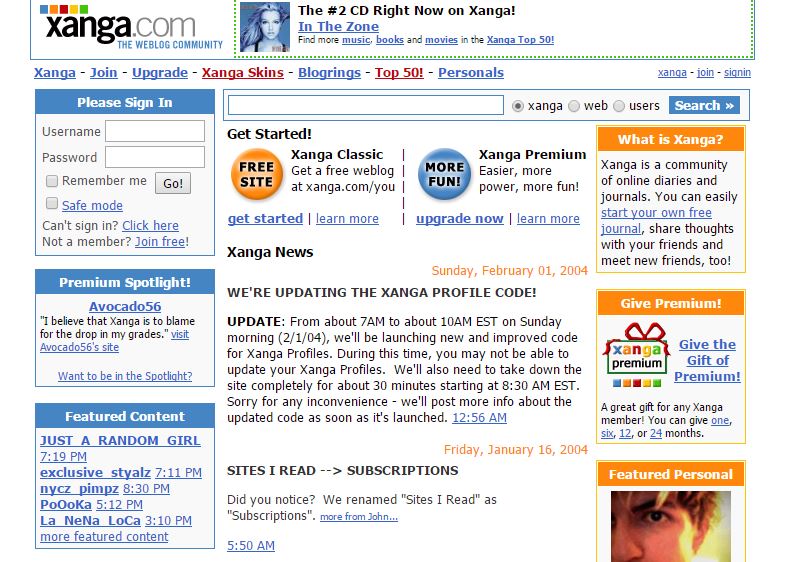 Yes, we saved everybody’s favourite for last! Bebo made a comeback in 2014 in the form of a mobile messaging service with a personalised twist. This created quite a stir, largely because those among us who didn’t foresee the closure of Bebo hadn’t gathered all the photos from their profiles before it shutdown and now they could get them back!  Perhaps it was due to the immediate regret of rescuing photos that were probably best off left in the abyss but the buzz around Bebo has since died down after the relaunch.

Although it was established after Facebook it took off a lot quicker and in Ireland it was the social network of choice for most people until as late as 2009 which we started migrating to Facebook where we shall forever reluctantly remain. It was just so much fun!

It was a simpler time wHen Evry1 uSeD 2 wrYt lYk dis and your friends would passively aggressively remove you from the number one spot of their top 16 because you sat beside someone else in English. Remember the ‘Share the Luv’ induced anxiety? Or expressing your emotions through the medium of Bebo Skins? The rage that came when your best friend ditched you as their ‘other half’ because they got a boyfriend/girlfriend?

Actually. Let’s leave Bebo the way it is.

So there you have it; a trip down Social Media memory lane. It hasn’t gotten much simpler as time has gone by but it is certainly much more sophisticated and has become the key way to interact with and promote your brand to customers and clients. If you want help with crafting an effective social media campaign which will get you the best rests, get in touch with emarkable on (01) 808 1301 or email info@emarkable.ie.

Let us know what your favourite social networking sites were on Twitter.