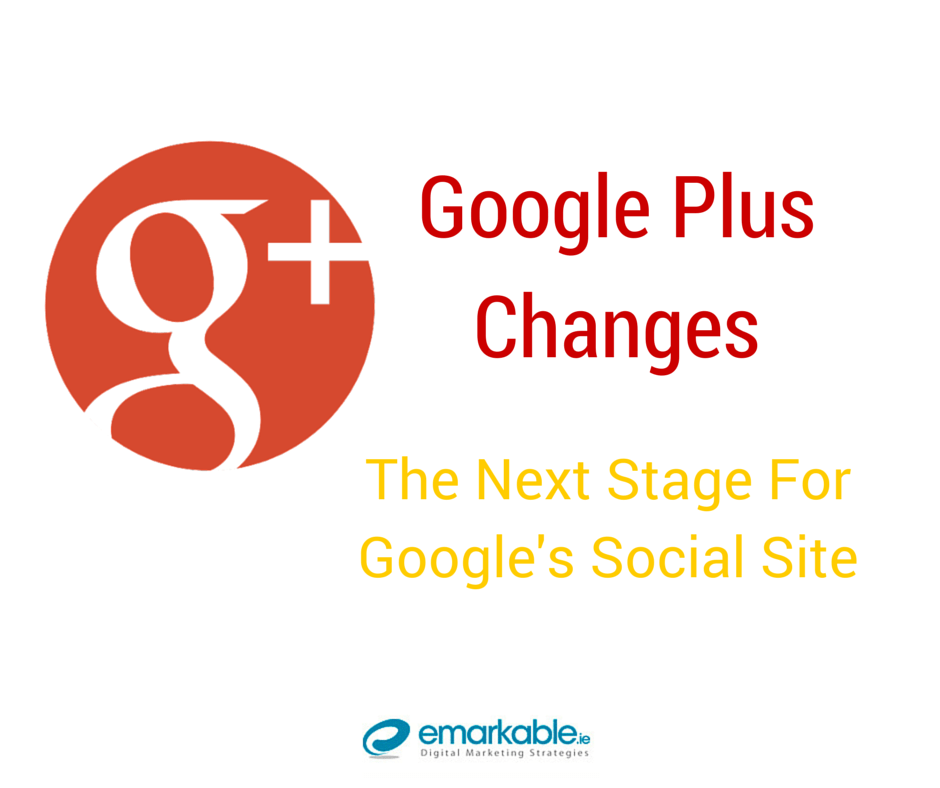 Google Plus Changes: The Next Stage for Google’s Social Site

Google Plus was born in 2011, it’s purpose was clear; to unite many of the online giant’s services under one umbrella- a Social Networking Website.

Despite comparisons, Google Plus made it clear that it did not want to rival Facebook. It was to become a social hub for people sharing common interests; a place where they could share rich content with one another and discover new and interesting facets of their industry or hobbies. It started of with great intentions and in theory it should have sky rocketed but a lack of activity and general public interest, Google+ struggled to break through the barrier upheld by Twitter, Facebook and LinkedIn.

As a result, Google+ has gone through various small changes, including a general algorithm update which meant that businesses with a  Google Plus Presence would benefit when it came to search engine ranking.

After many changes and tweaks, Google has decided to approach its social network in a completely different manner.

Here are the Google Plus Changes we know about

This is just the start of many changes, it seems. Google announced that the social network will separate from other facets of the Google Empire. More services will follow, although we haven’t been completely enlightened as to which ones they will be. We would hazzard a guess that their blogging platform, Blogger, will remain entangled with the social network.

A new photo application (Google Photos) has also been launched, which extracted the photo back up service from Google+, allowing it to become a stand alone service. This was largely welcomed by Android users who had no interest in using Google Plus, but liked the idea of backing their photos up with their Google account.

What can we expect from Google Plus in the Future?

Some may regard Google+ as a failure, however at emarkable, we see differently. Unlike Google’s previous attempts at social networking, this site has not failed. It is still present after almost five years and it is still used daily by a great deal of people. That doesn’t sound like failure. If anything these Google Plus changes spell progress; it certainly doesn’t look like they are ready to throw in the towel yet.

The question at hand however, what can we expect in the future, is still a difficult one to answer. The disintegration of the photo back up service and the separation of Google Plus from YouTube is a positive step. Now that people are not essential being forced to join a social network to use their favourite services, internet users maybe be more open to signing up. Will the network have the ability to move away from it’s niche of digital natives? Emarkable’s prediction is a resounding and simple: ‘no’. We predict that Google+ will remain on the social media hemisphere for years to come as a stand-alone website that will allow users to share media in a more interactive way than other social platforms. That being said, due to the professional landscape of the network we don’t think the general public will welcome it with open arms; it’s not a warm enough environment for sharing personal and it is a little too colourful for a streamlined professional networking service like LinkedIn. In order for Google+ to expand they will need to decide what they want to be.

Are you overwhelmed by the ever-changing interface of social media? Let us take the driving seat. Get in touch with emarkable on 01 808 1301 or info@emarkable.ie to find out how we can drive social media success for your business.